The Wines of Germany 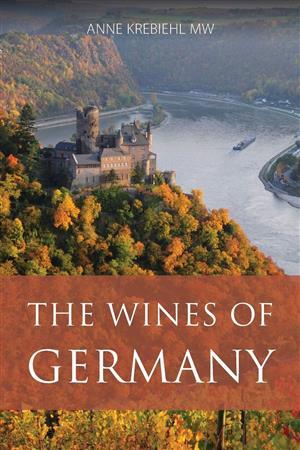 As anyone who follows our Magazine cannot have failed to notice, we are deeply fond of German wines, although our focus is in fact on cold climate wines, in general. But these days Germany is evolving particularly fast as a wine country.

Master of Wine and German-born Anne Krebiehl have also not failed to notice this and Infinite Ideas Limited has recently published her book The Wines of Germany, which we of course had to get our hands on. And we have decided to share a bit of our experience with the book here.

Adorned with a picture of Katz Caste in the front and Trittenheim in Mosel in the back, we find the paperback version inviting to look at and to hold. It looks modern and the texts are enticing.

The book then begins with five maps of German wine regions – and while the position might make them easy to look up later – and also give the reader an immediate geographical reminder of the book’s content, it is one of the weaker parts of this book. The maps are kept in black and white and particularly the first one, displaying the positions of the regions in Germany, is difficult to make out. Five maps on four A5 pages is not a lot of space to illustrate a wine country of Germany’s size and the lack of colour does not add to the amount of details on the maps. You will need your reading glasses.

Quickly moving on through Anne’s introduction and a remarkably short, but precise account of German wine history, the author jumps bravely and directly into the complex wine laws of Germany. And she does so with grace. The account is both interesting, easy to understand, and serious without ever getting too complicated or overly detailed – that is for other books to be. Enough graphs, tables and highlighted ‘wine facts’ breaks up the text to make the ‘hard core’ wine knowledge easy to remember and get through.

And with the judicial, geographical, and historic setting all in place, the author moves on to describe in detail the favourite grapes of Germany (you know which ones they are), and gives us a short speculative note on climate change, before diving into each wine region in detail.

Once again, we do miss some detailed maps of the regions at each section, but the text itself is wonderful for those wishing to know more about German wines, but who hasn’t studied it in detail before. Each region is given a subtitle which sums up the essence of the regions really well, in our opinion. A few Weingüter at each section is also described with the authors recommendation, but no specific ratings are given. It just not that kind of book.

At the end you’ll find a glossary of German wine words, which is particularly helpful to those, who have just gotten interested in German wines, and you’ll find a decent size index for the those, who knows what they are looking for. The bibliography reveals mostly new literature published in the last century with a few well-chosen exceptions. Both English and German literature is listed.

In the end, we would recommend the book to those relatively new to German wines or those who just can’t get enough of it. The book could definitely benefit from more graphical depictions and use of colours, but it almost makes up for it due to the language, composition of text and well-chosen content.

The Wines of Germany